Our luxury adventure ride offers a 7 Night 8 Day package where you ride a circuit on horseback with stop-overs at different lodges and fly camp on the reserve. View magnificent game on route with god chances of viewing the big 5 and discover our varied daily adventure.

Entabeni Safari Conservancy, is situated in the World Heritage “Waterberg Biosphere” of the Waterberg region. Approximately a three-hour drive north of Johannesburg. The 22 000ha malaria-free reserve boasts five eco-systems. The upper escarpment offers majestic craggy rock formations and wide-open grass plains and is separated from the lower plateau by 600m high cliffs. The lower escarpment is approximately three degrees warmer and comprises sandveld vegetation and a series of wetlands.

Daily riding time: 4h to 5:30h depending on weather, sightings and guests fitness. Note that there is some waling involved. The more challenging route where we partially walk up the mountain can be done in a game drive vehicle if your physical fitness doesn’t allow for this. 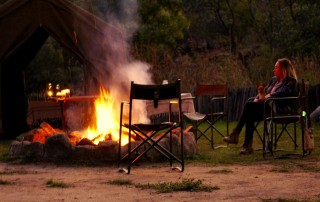 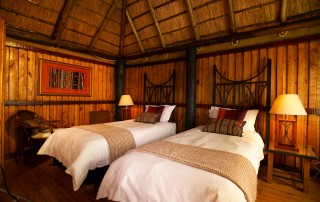 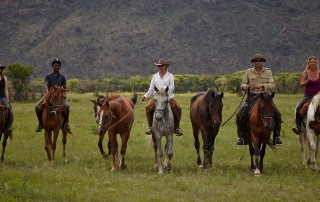 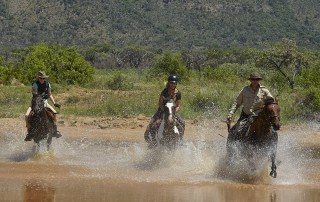 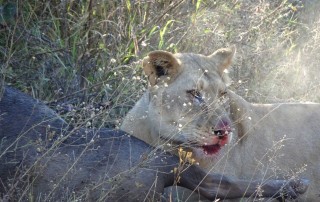 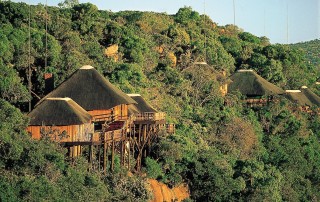 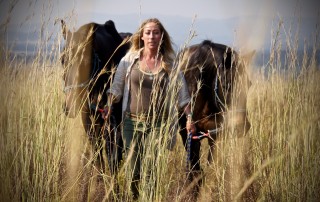 Moderate climate with a summer rainfall (Malaria Free). Days tend to be hot in summer, cooling down in the evenings. In winter daytime temperatures are warm, but evenings and night can be cold.

Arrival and Game Drive
Arrive at the reserve, for a late lunch
Settle in for the night in the comfort of one of the lodges on the lower escarpment.
Your game drive will depart at 4:00
Arrive as the sun sets, hopefully with your first pictures of some magnificent game.
Dinner will be served at the lodge at 7:00pm
Night: Wildside

Moving day – Lower Escarpment to upper escarpment with brunch on route
Light breakfast will be served at 7:00 and you will be transferred to the horses at 9:00am to start your ride on the lower escarpment, through big game territory.
After about an hour and a half in the saddle, you will reach Waterberry picnic spot for brunch at appx. 11:00 before you start your climb up the escarpment.
The journey continues after a short rest, to climb the escarpment which is separated from the lower escarpment by 600m high cliffs. You will partly leading your horse over one of the steepest roads on South Africa, which has a gradient of 40 Degrees at some points. As you reach the top, you will have some time to refresh yourself in the natural rock pool with spectacular views and crystal clear water. The ride continues onto the plains – an idyllic scene hopefully spotted with game. You will reach fly camp at Boukenhout at about 3:00pm in time for high tea and settling into the place you will call home for the next 4 nights. Dinner will be served around the glistering fire, at 7:00pm
Night: Boukenhout Fly Camp location

Valley ride
Early start at 6:30, you will have a juice and some fruit in your saddle bag. The ride will take you along flat rock valley, until you reach a waterfall where you will stop for a tea/coffee and a snack. You will be back at fly camp for an opulent brunch at around 9:30. You can relax in the hammocks or chill out area at fly camp, until 3:00pm when high tea is served. You also have the option to make use of some of the activities during mid day.
You will be back on the horses at 4:00pm to ride Cycad valley and Ubumanzi, to return to fly camp as the sun sets for your well deserved gin and tonic around the fire, followed by dinner under the stars.
Night : Boukenhout Fly camp

Kgamakutla point Sundowner ride
7:00 start after a light breakfast, to ride long east long west where your guide will point out animals tracks and signs along the way, in hopes of finding some of Africa’s giants.
You will arrive back in camp after a two hour ride, for brunch – followed by some time to take a plunge in the river, laze in a shady spot on a picnic blanket or hammock… At 4:00pm high tea will be ready, before you mount for your afternoon ride which will take you to a magnificent viewpoint for some elaborate sundowners – just like a scene from Out of Africa. You will arrive back into camp for a typical South African braai listening to the sounds of the bush come to life as you sit by the glistering fire with a wonderful South African wine to set the scene.
Night: Boukenhout Fly camp

Plains ride and sundowners
Early breakfast, and on your horse at 6:00am. You will ride West on sandy tracks with some opportunity to pick up speed. East towards Ingwe valley, with some chances of spotting some more illusive animals in the thicker vegetation and past a lake with some chance of seeing hippos. The ride continues onto the wide open grass plains and back to camp for lunch. In the afternoon, the ride will set out for another 2 and a half hours, as the day gets cooler for some spectacular views of the lower escarpment. On return to camp, there will be drinks set out on the rocks in the river, where you can watch the sun set and set the tone before your candle lit dinner at camp. Your bags will be packed for the following days move to the lodge.
Night: fly camp

Moving day with picnic at yellow wood rock pools
You will have a later start today (weather depending) at about 9:00am. After a light breakfast at fly camp, you will ride to Yellow wood an idyllic spot with a natural plunge pool and deck with another awe-inspiring view where brunch will be served, after your two hour ride. The ride continues as it gets cooler at appx 3:00pm across open grassland, and to Ravineside lodge. You will arrive at your lodge before sunset to settle in. Drinks and a three course dinner at the lodge awaits you.
Night: Ravineside Lodge

Outer Rim view rides
An early start after a light breakfast at 6:30am, just in time to catch the stunning morning views and crisp air from the outer rim, overlooking the views of the lower plateau. The ride will take you into a different scenery, riding some rocky ledges, and taking a swim in the dam with the horses, as it gets warmer. You will return to the lodge after a two hour ride for brunch – You will have some time to relax at the lodge and maybe make use of some well deserved spa time. (at extra charge) You afternoon ride will leave the lodge at 3:30pm appx to ride for another few hours to Hanglip viewpoint with good chances of seeing abundant game on the open areas and Ungululu. You will stop at the viewpoint, for some stunning pictures with your horse, and back to the lodge along Tswene.

On return to the lodge, your bags will be packed for the following days move to the lower escarpment. Dinner will be served at the lodge.
Night: Ravineside Lodge

Moving day upper to lower escarpment and departure
Your bags will be packed for the team to take to the meeting spot for departure. After an early breakfast at appx 6:30 you will set off to ride for about 1:30h until you start your descent to the lower escarpment, riding and again partly leading your horses for about 45 minutes, until you reach the lower escarpment and ride to the reserve exit, with another spectacular route with a change of scenery. You will ride the horses to the “extreme 19th” gate, where the horses are based by about 10:00am. Brunch will be served at the clubhouse, looking onto the golf club. You will have the chance to take showers on the resort before your departure to the airport at 13:00.

Our weight limit for riders is as follows:
• Under 95kg no supplement
• 95-105kg no extra supplement but subject to availability

TERMS & CONDITIONS
Note that the following is at the discretion of Auersperg Safaris Ltd. and rates/itineraries are subject to change.
Payment All payments to Auersperg Safaris Ltd. are to be in EUR or the equivalent agreed currency. A 30% deposit on the accommodation figure is required to confirm all bookings within 14 days of a written confirmation otherwise the booking will be taken to be provisional and will be liable for cancellation.
Cancellation policy is as follows:
Confirmation On confirmation of a booking an invoice will be issued and your booking will then be subject to the below cancellation policy. All cancellations must be in writing.
Cancellation – 30 Days prior to date of arrival: 30% non-refundable deposit is forfeited. 20 – 0 Days prior to date of arrival: 100% of total safari cost is forfeited. Please quote your name and invoice number on the payment and instruct your bank that the beneficiary Auersperg Safaris Ltd. should receive the full invoice amount, with no charges deducted. Please contact us for payment details.

https://www.auersperg-safaris.com/cookie-policy/
This site uses cookies. By continuing to browse the site you are agreeing to our use of cookies Find out more.